Recent years have seen a dramatic reduction in the size of mechanical elements that can be used as mass and force sensors. For the most sensitive applications, micro-processed Si cantilevers are starting to give way to bottom-up fabricated structures such as NWs and carbon nanotubes (CNTs). Bottom-up processes rely on self-assembly or driven self-assembly and allow for the production of nanometer-scale structures with atomic-scale precision. This trend towards miniaturization is not arbitrary: smaller mechanical transducers are inherently more sensitive [1,2]. At the same time, atomic-scale control in the growth of such structures presents the opportunity to drastically reduce defects, improving mechanical quality and therefore also ultimate detection sensitivity.

Among the large variety of bottom-up nanostructures, NW cantilevers are particularly promising mechanical sensors due to their high aspect ratio. A long and thin NW that is clamped on one end forms an ideal scanning probe, making it amenable to a number of sensitive nanometer-scale imaging problems. At the same time, its symmetric cross-section results in orthogonal flexural mode doublets that are nearly degenerate. These modes allow a NW to be used as a kind of nanometer-scale force compass, such that both the magnitude and direction of a force can be measured [3]. When the NW axis is oriented perpendicular to a sample surface, i.e. in the pendulum geometry, this enables the vectorial transduction of lateral forces. Moreover, the pendulum geometry allows a significant reduction of surface-induced dissipation compared to the more conventional parallel configuration. Furthermore, epitaxial growth allows the realization of NWs from a number of materials as well as heterostructures of such materials. In fact, due to their large surface-to-volume ratio, NWs are able to accommodate larger strain than conventional epitaxial films, allowing for the dislocation-free combination of materials with large lattice mismatch.

The application of NWs to force sensing is proving particularly apt. As highly sensitive scanning probes, NW sensors have the ability to reveal subtle force fields with high spatial resolution. Unlike conventional AFM, which reveals large, close-ranged forces – in some cases with atomic resolution – NWs are adept at discerning weak interactions. Ultra-low intrinsic mechanical losses make NWs excellent probes of tip-sample dissipation, a contrast which can be used to observe phase transitions as well as the local density of states. The capability of nearly symmetric NWs to transduce lateral forces in two directions allows for imaging the full vectorial character of force fields. In particular, this enables the distinction of nonconservative forces, such as optical or frictional forces, from conservative ones, such as those arising from an electrical potential. Functionalized with a magnetic tip [4], a NW cantilever forms an excellent probe for the subtle magnetic field patterns produced by nanometer-scale magnetization textures such as domain walls, vortices, and skyrmions; superconducting vortices; mesoscopic transport in 2D systems; and small ensembles of nuclear spins. Although NW force sensors are just starting to be used for many of these applications, they have already been applied as the active sensors in some of the most sensitive and highest resolution magnetic resonance imaging experiments realized to date.

Our group, along with a few other groups in the world, has been leading the way in the exploration and development of NW force sensors [5-7]. At present, the promise of these devices has been demonstrated in a small number of proof-of-concept experiments. These applications demonstrate the capabilities of NW transducers and their unique advantages, especially in the detection of weak forces. Nevertheless, much work remains to be done before NWs become part of the standard tool-box of scanning probe microscopies. Better spatial resolutions could be achieved by developing NWs with sharper tips through, for example, specialized growth techniques or by focused ion beam milling. Combined with its vectorial force sensing capability, such a NW scanning probe could be used to reveal the anisotropy of atomic bonding forces. Force sensitivity can undoubtedly be improved by developing longer and thinner NW transducers. Higher force sensitivity would also translate into more sensitive measurements of dissipation and non-contact friction. The combination of high force sensitivity, high spatial resolution, and low invasiveness of magnetic NW probes has the potential to expand the applicability of MFM. Such sensors could image the stray field from thin ferromagnetic layers and other magnetic nanostructures hosting non-uniform states too fragile for conventional MFM. For such applications, efforts must first focus on producing smaller magnetic tips. The resulting improvement in spatial resolution, combined with the already demonstrated sensitivity to charge currents, could make magnet-tipped NWs ideal tools for mapping mesoscopic current flow. Recent interest in imaging current densities in 2D materials has already driven the development of NV and SQUID-based SPM; NW cantilevers could find similar applications. In addition, by combining NW transducers with ferromagnetic resonance techniques, the spatial imaging of spin waves and the dynamics of individual skyrmions may also become possible. 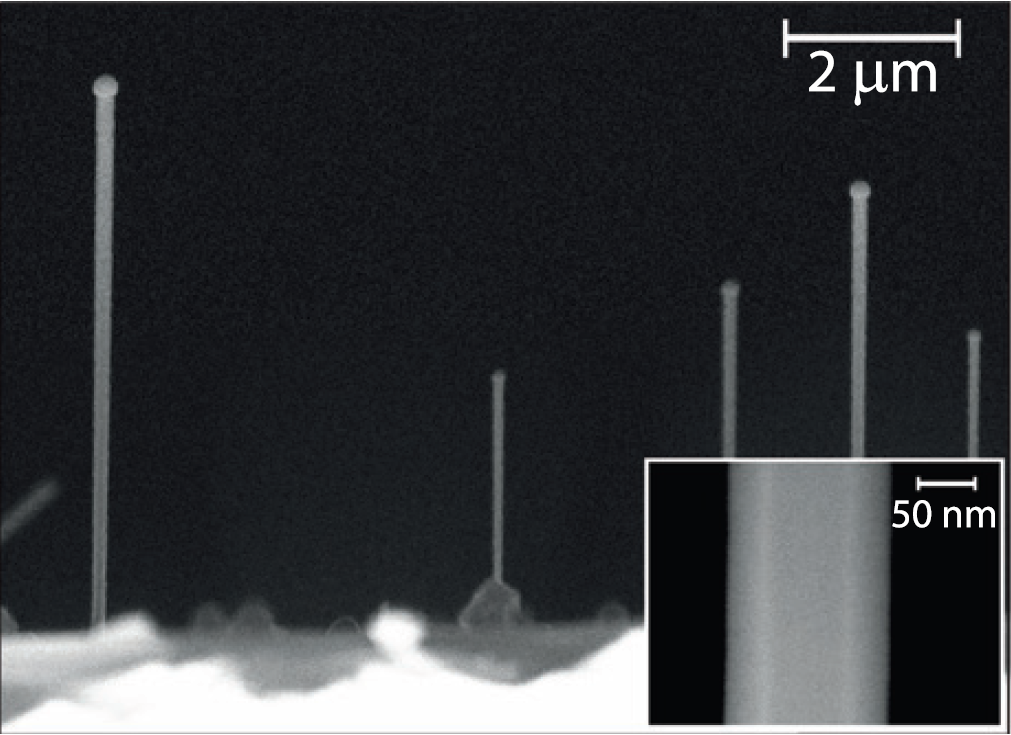 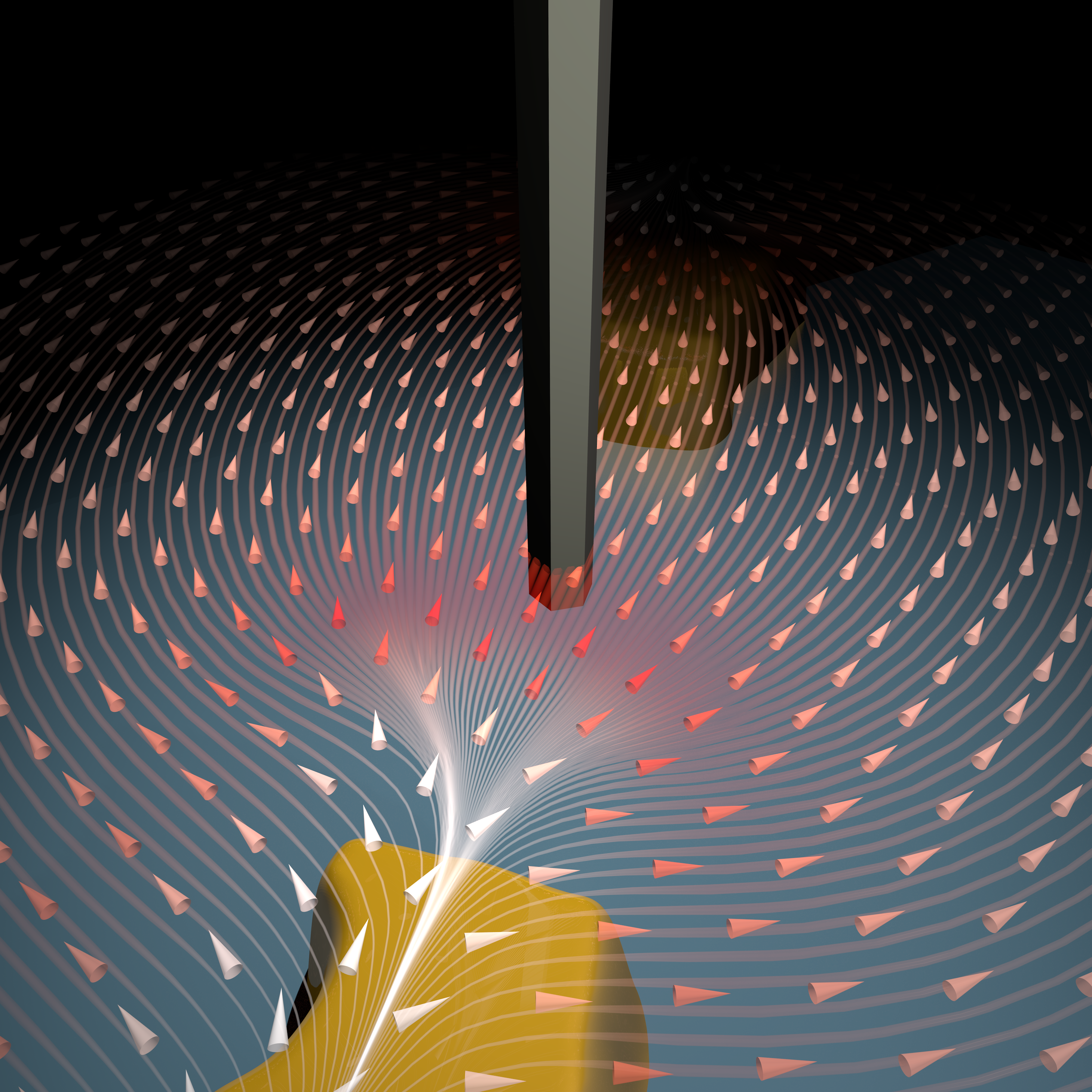