Optical fiber is a thin flexible, transparent fiber made from finely pulled glass. Such fibers are widely used as a means to transmit information encoded in pulses of laser light. Today, fiber-optic links have largely replaced copper wire in core communications links throughout the developed world.  Signals travelling along optical fiber suffer fewer losses than wire cables and are immune to electromagnetic interference.  These ubiquitous fibers are typically terminated with connectors, so that they can be easily attached to other equipment. Short lengths of fiber with a connector on one end and an exposed fiber on the other end are known in the industry as a “fiber pigtails” and are generally used for making connections to individual fiber of a multi-fiber cable or for direct connections to photo-receivers or other optical devices.  For example, a “pigtailed” photo-diode is a photo-diode that has been directly connected to the end of an optical fiber with a connector on the other end.  It offers easy integration of the photodiode into a fiber-optic system or network.

Recently, we have developed the so-called “quantum fiber pigtail” [1]. This is a fiber pigtail that has semiconductor quantum dots (QDs) attached to one end. It provides on-demand single photons at GHz rates in a robust, compact, and alignment-free device. It is an easy-to-operate source of quantum light, which makes it promising for applications in quantum communication and in precision sensing. Unlike conventional sources for quantum light, which are often complex networks of bulky free-space optical components, the “quantum fiber pigtail” promises to bring single photon sources to any user able to work with optical fiber.

In order to realize the “quantum fiber pigtail”, we combine QDs, which are efficient single photon emitters, with a nanoscale photonic structures, which can efficiently guide and control spontaneous emission.  Specifically, they embed QDs within a tapered photonic wire, a so-called “photonic trumpet”. This trumpet is then directly attached to the cleaved end of a single mode fiber with a connector on the other end. This attachment process involves a high-power optical microscope and a hydraulically actuated micro-manipulator. The entire process can be viewed in the following movie available online: https://youtu.be/E_A3y_K3kRw. Thanks to adiabatic expansion of the guided mode confined in the trumpet, the team achieves a high collection efficiency at the output of the fiber-pigtail.

The result represents a proof-of-principle for an easy-to-operate single photon source, with potential applications in quantum optics or metrology. Our approach provides a solution for maximizing light extraction from quantum dots, however, it is generic and could be applied to other quantum systems, including in emitters in diamond or silicon. Furthermore, easily addressable QDs or other emitters at the end of a nanometer-scale tip have obvious potential as scanning probes. Possible applications include single photon near-field microscopy, deterministic quantum plasmonics, or electric and magnetic field sensing.

We subsequently focused on a proof-of-principle demonstration of this device as a scanning electric field sensor, with potential applications in scanning probe microscopy. In particular, we used the tip-like geometry of the fiber-pigtail to scan a sample while monitoring a single optically active QD within the pigtail [2]. This allowed us to map the z-component of the electric field induced by a pair of electrodes patterned on a surface by measuring the quantum-confined Stark effect induced on the spectral line of the QD at the pigtail tip. Our results are in good agreement with finite element simulations of the experiment. Furthermore, these simulations point to realistic improvements of the device, which should allow us increase sensitivity to electric fields. These characteristics, combined with a spatial resolution roughly set by the bottom diameter of the tip, are promising for the mapping of single charges on surfaces, measuring individual tunneling events, and monitoring charging dynamics in few-electron and mesoscopic systems. patial scanning [9].

In 2015, Wagner et al. used a noncontact atomic force and scanning tunneling microscope functionalized with a single molecule to image the dipole field of an adatom on a surface [3]. This first demonstration of scanning quantum-dot microscopy (SQDM) registered single-electron charging events of a molecular QD to produce three-dimensional images of the local electrostatic potential with subnanometer resolution. Nevertheless, prior to our work [3], a scanning electric-field sensor based on an optically active semiconductor QD had not yet been realized. Such SQDM has the potential for a very large bandwidth, which, unlike electronic and mechanically addressable sensors, is limited only by the spontaneous emission rate of the QD and could therefore approach the gigahertz range. Future improvements to this first proof-of-principle include measuring by resonance florescence, optimizing the geometry of the photonic wire tip and the position of the QD, and improving the electrostatic noise environment of the sensor. 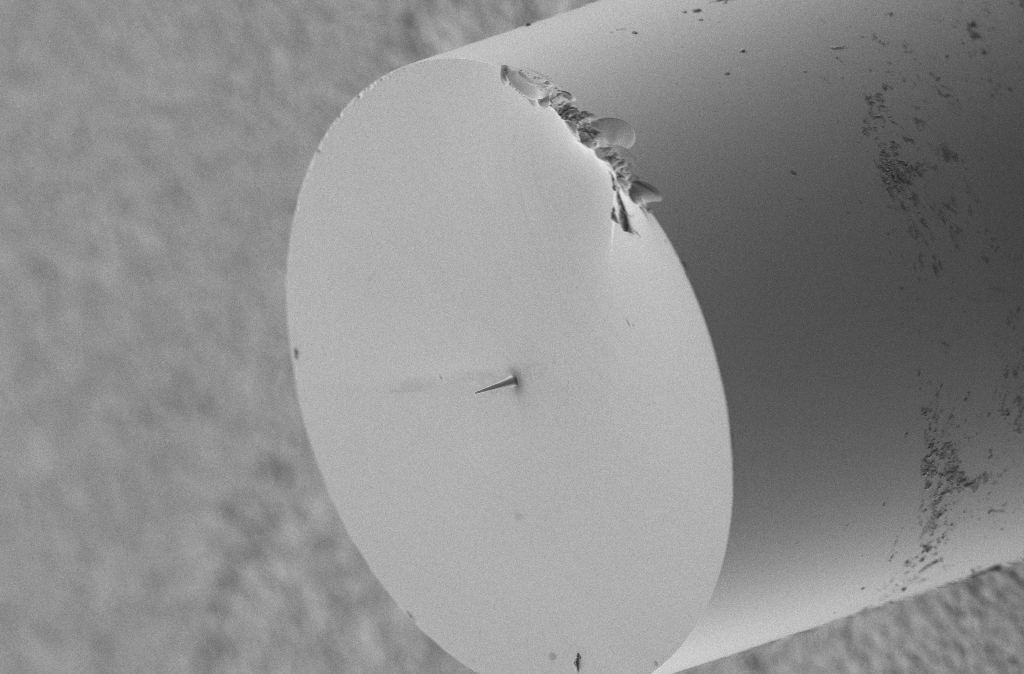 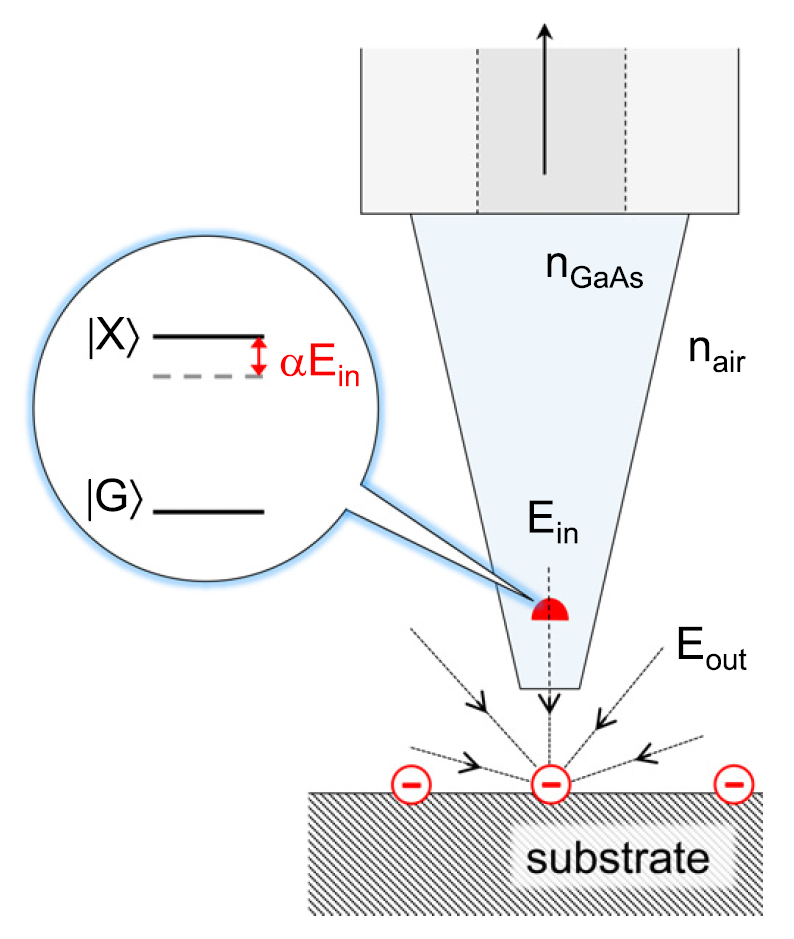 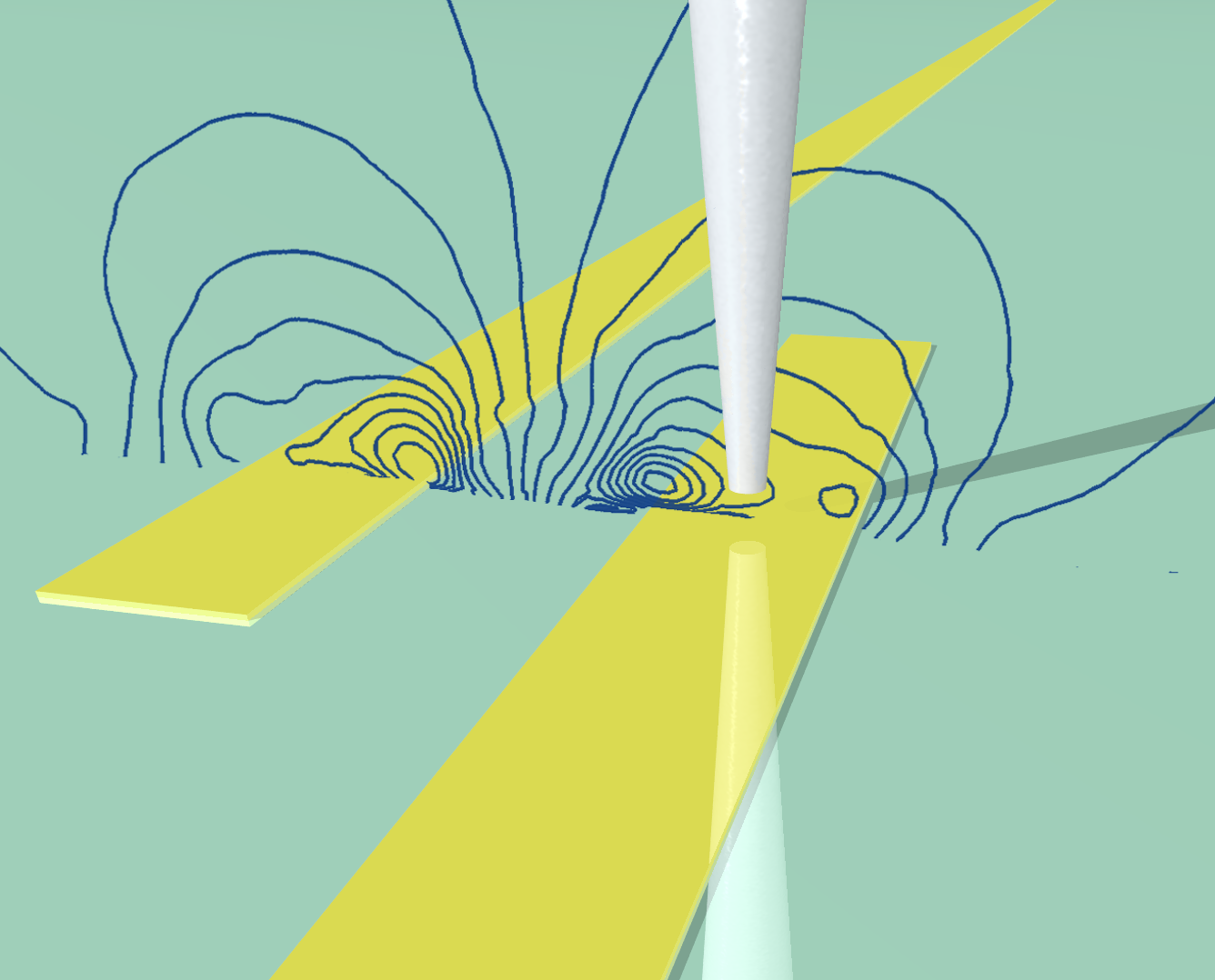