Despite the rapid development of NV scanning probes, scanning SQUIDs remain the most sensitive magnetic field probes. Taking advantage of a SQUID’s extreme sensitivity to magnetic flux, SSM was first realized in the early 1980s [1]. As imaging resolution has improved from the micrometer- down into the nanometer-scale, a number of strategies have been employed to realize ever-smaller sensors, which simultaneously retain high magnetic flux sensitivity and can be scanned in close proximity to a sample. One strategy has involved miniaturizing the pick-up loop of a conventional SQUID and placing it at the extreme corner of the chip where it can come close to a sample. The most advanced of such devices uses a loop with a 200-nm inner diameter to achieve sub-micrometer imaging resolution and a sensitivity of 130 nT/Hz1/2 [2]. Although this design has the advantage of allowing for susceptibility measurements, the size of the sensor and minimum distance from the sample, which together determine the imaging resolution, are limited by the complex fabrication process.

The highest resolution and sensitivity have been achieved by a different solution: using nanometer-scale SQUID (nanoSQUID) sensors. Most nanoSQUIDs lie on the plane of a large substrate and are therefore complicated to apply as scanning sensors. Although there have been demonstrations of magnetic imaging by scanning samples in proximity to such SQUIDs – including by our own group [3] – the geometry is not amenable to a generally applicable microscopy. To solve this problem, Finkler et al. of the Zeldov group at the Weizmann Institute introduced the SQUID-on-tip (SOT) design, in which a nanoSQUID is fabricated on the end of a pulled quartz tip [4]. The fabrication starts with a hollow quartz tube, which is melted and pulled into a sharp pipette. A film of superconducting material, which is used to form the SQUID and the superconducting electrodes leading to it, is then evaporated onto the pipette in a custom-built evaporator. This machine allows for the rotation of the pipette relative to the evaporation source, such that three different evaporations at three different angles can be realized. Due to the directional nature of the evaporation process, it produces two superconducting electrodes down the sides of the pipette connected to a superconducting loop at its apex. In this loop, geometrical constrictions form in the gap between the electrodes, resulting in two Dayem bridge Josephson junctions (JJs). Together, these elements constitute a nanoSQUID that can be scanned in close proximity to a sample.

Working SOTs were first realized using Al as the superconducting material [4], however, the low critical temperature of Al prevented operation above 1.2 K. In addition, the large coherence length ξ and penetration depth λ of the granular Al films precluded the realization of sensitive devices with dimensions below 100 nm. Later, better results were obtained with Nb and finally Pb [5], which allowed for higher operating temperatures and had both shorter ξ and λ. As a result, Nb and Pb SOTs could be made smaller than Al SOTs. Operating fields up to 1.2 T were realized for the Pb SOTs with 50 nm diameter, since all the characteristic lengths in the devices were on the order of x. Between the two materials, the Nb SOTs displayed a flux noise of 3.6 µF0/Hz1/2 compared to 50 nF0/Hz1/2 for the Pb SOTs, which represents one of the lowest noise levels ever achieved [6]. The better performance of the Pb SOTs was likely due to the shorter ξ of the Nb SOTs.

Given the outstanding properties of the Pb SOTs, including 50-nm sensor-size, with sub-100 nm spatial resolution, a sensitivity of 5 nT/Hz1/2, and operation up to 7.2 K and 1.2 T, further experiments and development were carried out using this material. Technical refinements included SOTs with sensitivity to both in- and out-of-plane magnetic fields [7] and electrically tunable SOTs with uniform field sensitivity up to 0.5 T [8]. SSM with Pb SOTs has now been applied to probe dynamics and pinning of single superconducting vortices [9], to visualize superparamagnetic dynamics in topological insulators [10], and to observe emergent nanoscale superparamagnetism at oxide interfaces [11]. In addition, in 2016, the Zeldov group demonstrated scanning thermal sensing based on Pb SOTs with 50 nm spatial resolution and 1 µK/Hz1/2 sensitivity [12]. This represents a sensitivity, which is 4 orders of magnitude better than other devices, and has already enabled the observation of dissipation due to individual quantum dots in carbon nanotubes and resonant localized states in graphene. Such sensitive thermal microscopy is possible only because of the SOT geometry, which uses a nanoSQUID as the scanning probe rather than a miniaturized pick-up loop coupled to a conventional SQUID.

In our own group, we have learned to fabricate and use scanning SOT sensors.  In 2018, we used them to study the equilibrium magnetization configurations and reversal behavior of ferromagnetic nanotube (FNTs) [13], complementing our other studies using sensitive torque magnetometry and x-ray photoemission electron microscopy (XPEEM). As a result, we have been among the first to unravel the magnetic behavior of real FNT samples. We also are running experiments using scanning SOT sensors to investigate the stray magnetic fields of artificial spin ice and helimagnetic materials hosting magnetic skyrmion phases. In addition to imaging nanomagnetic textures, we have also used scanning SOTs to investigate the microscopic dynamics of superconducting vortices, because understanding and controlling vortex dynamics is crucial for optimizing many superconducting devices. Most recently, we investigated vortex pinning and dynamics in superconducting thin-films of MoSi [14]. Finally, we are beginning to apply the scanning SOT sensors to map current flow in mesoscopic two-dimensional devices. In particular, we are interested in imaging local magnetization and current flow in van der Waals heterostructures, which have recently been show to host correlated states whose manifestations range from superconductivity to highly insulating states, to potentially magnetic states. The fragility and sensitivity of the observed states to inhomogeneities has limited their macroscopic manifestation and complicates global measurements of transport or magnetization. Sensitive nanoscale imaging of these systems is urgently required to probe local properties. 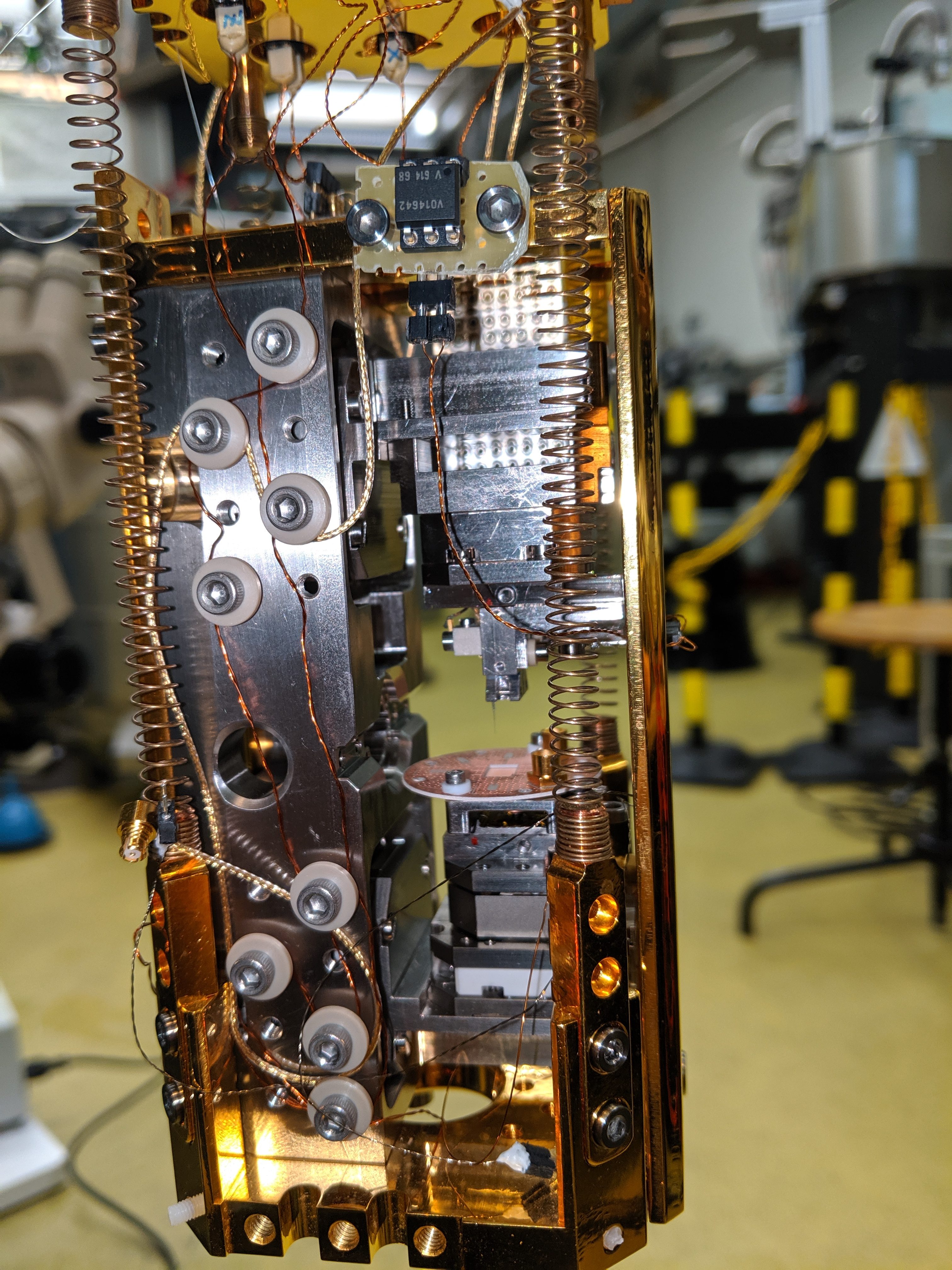 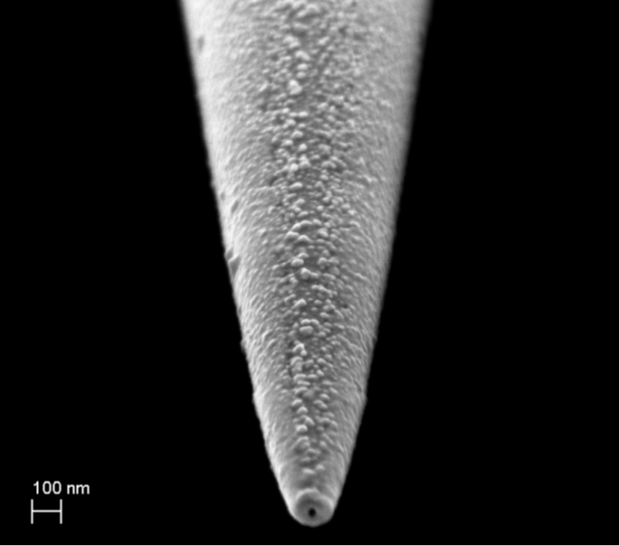 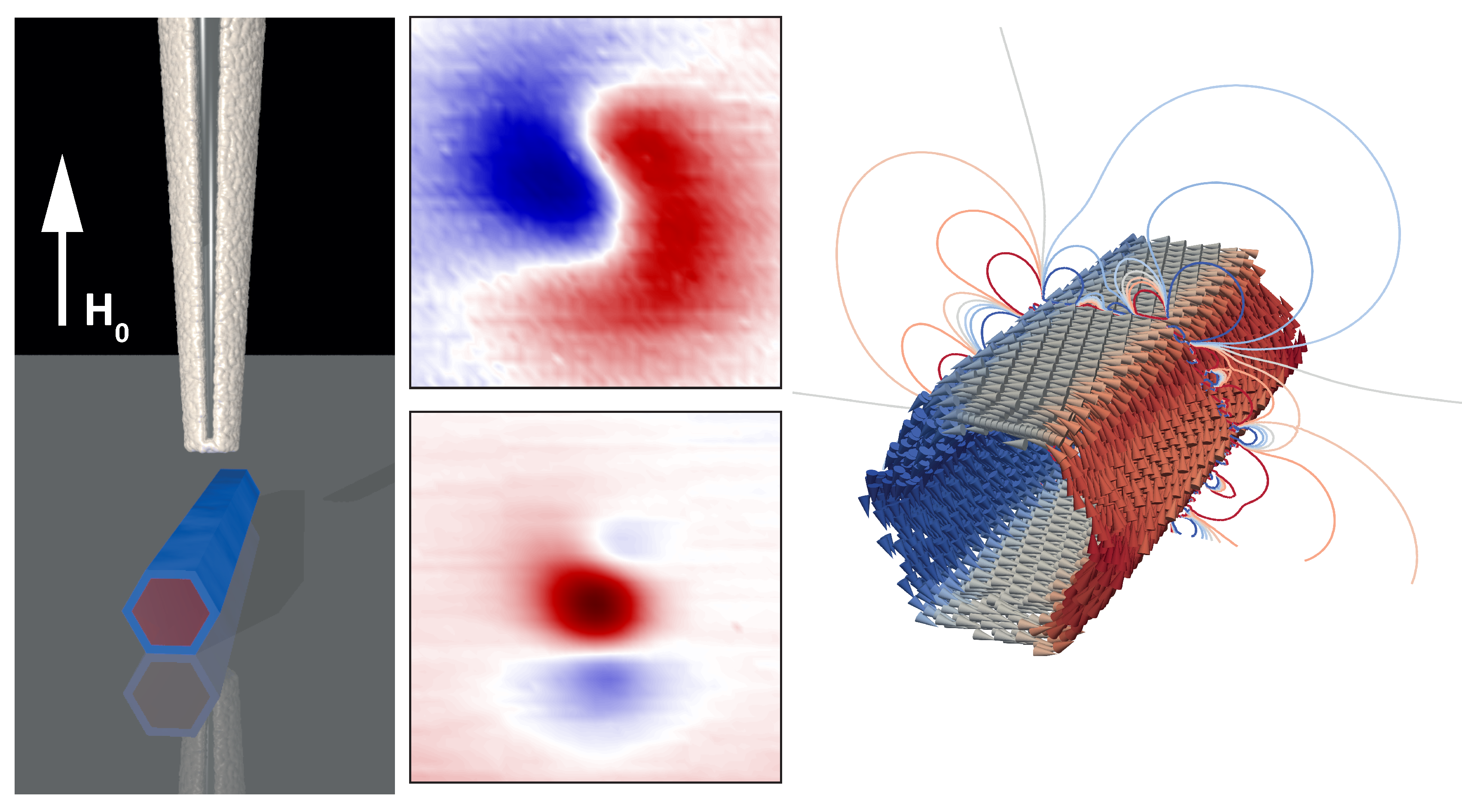