The synthesis and investigation of ferromagnetic nanostructures has been motivated both by a large number of potential applications and by fundamental questions about the physics of nanometer-scale magnetism. Magnetic nanoparticles have potential biological and biomedical applications, applications in high-resolution magnetic imaging, as magnetic sensors, and as dense magnetic storage media. At the same time, the low-dimensionality of these structures results in magnetic conﬁgurations not present in macroscopic magnets. Until recently, due to their small size and inherently weak magnetic moment, experimental investigations have often been conducted on large ensembles of nanomagnetics structures. The results are often difficult to interpret due to stray-ﬁeld interactions and the distribution in size and orientation of the individual nanomagnets.

We use sensitive dynamic-mode cantilever magnetometry (DCM) to investigate the magnetic state of single nanomagnets. Our approach has allowed us, for example, to measure the moment, anisotropy, and switching behavior of single ferromagnetic nanotubes and individual skyrmion-containing nanowires as a function of applied magnetic ﬁeld and orientation [1-3]. The technique requires that the nanomagnet under investigation be attached to an ultrasensitive cantilever. The cantilever is then mounted in a vacuum chamber at cryogenic temperatures and in an variable applied magnetic field. Due to its high sensitivity, cantilever magnetometry is well-suited for the detection of the weak magnetic response of a variety of nanometer-scale systems. In particular, the technique has been used to measure persistent currents in normal metal rings [4], the magnetization of superconducting nanostructures [5,6], and magnetization reversal in a single iron-ﬁlled carbon nanotube [7] and a single Ni nanorod [8]. DCM measurements are particularly useful for identifying magnetic phase transitions, since – just as with measurements of magnetic susceptibility – DCM frequency shift should be discontinuous for both first and second order phase transitions [9].

Using this method we can gain microscopic insight into the reversal mechanism of an individual nanomagnets. In particular, we have applied this technique to ferromagnetic Ni, Py, and CoFeB nanotubes [2, 10-13]. Ferromagnetic nanotubes are particularly interesting because, unlike nanowires, they support core-free magnetic states. Such conﬁgurations avoid the magnetic point singularity along the axis of the structure, thereby resulting in a fast and controllable reversal process. In addition, previously unforeseen dynamic effects are possible in nanotubes. Domain walls moving in nanotubes are predicted to avoid a Walker breakdown and give rise to Cherenkov-like spin wave emission. Both numerical simulations and analytical calculations show that the tubular geometry favors two main in-plane states: a uniform axial state with the magnetic moments pointing along the tube axis and a global vortex state with moments pointing circumferentially around the tube. Due to their ﬂux-closure conﬁguration, vortex states produce much lower stray ﬁelds than uniform states; as a result, magneto-static interactions between nanomagnets could be reduced resulting in densely packed magnetic memories.

In addition to using DCM to unravel the magnetization configuration and reversal of ferromagnetic nanotubes, we have been using the technique to study nano-structured helimagnets and other nanometer-scale samples hosting magnetic skyrmion phases. As in our initial DCM measurements of MnSi nanowires [3], we are interested in the effect of nano-structuring on the the stability and extent of the skyrmion phase. 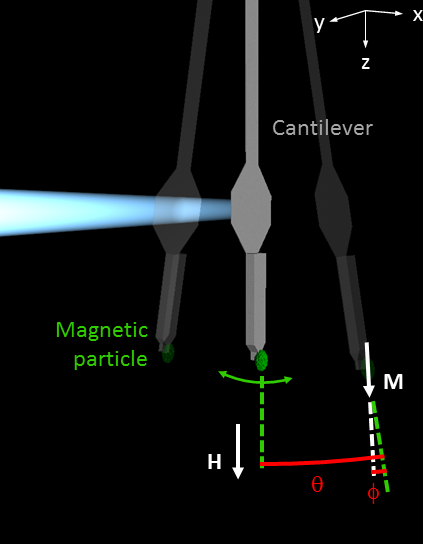 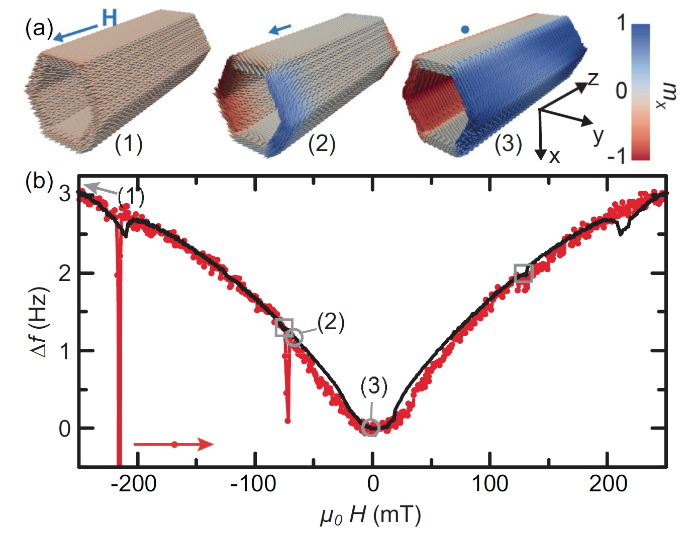