On the 16th, Aris Lafranca started work on his Masters thesis in the group. Aris previously carried out a very successful Masters project in our group, in which he designed, built, and characterized a small room-temperature high-vacuum Michelson interferometer for mode imaging of nanomechanical resonators. He worked with Dr. Francesco Fogliano and Dr. Thibaud Ruelle. Now, Aris will rejoin Francesco and the nanomechanics team to investigate a number of nanomechanical resonators and the optomechanical properties.

On the 17th, Prof. Poggio gave a lecture at a Ph.D. Course at EPFL on “Advanced microscopy techniques for characterizing magnetic properties of materials” entitled, “Nanomagnetic Imaging using Scanning Probe Micrsoscopy Techniques” (video). The lecture was based — in part — on our recent review entitled, “Nanoscale magnetic field imaging for 2D materials”. Download the slides and lecture notes here; see videos of all the school talks here. 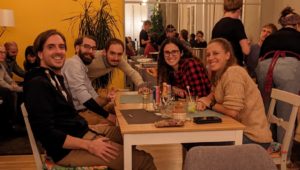 On the evening of Wednesday the 16th, the group had its annual holiday/year-end dinner. This year we went to the Tapiocarhy Brazilian restaurant on Allschwilerstrasse in Basel for a special feijoada event. Feijoada is a tasty Brazilian stew of beans and meat and was served by the restaurant along with typical appetizers, side-dishes, and dessert. Group members enjoyed the food along with beer, caipirinha, and various fresh-squeezed juices. Thanks to all for a good time! Pictures are here.

In mid-November Zurich Instruments published an interview with Prof. Poggio in its newletter. The interview mostly covered his new role — as of August of 2022 — as director of the Swiss Nanoscience Institute (SNI).

On the 27th, Prof. Poggio visited Nanosurf AG in Leistal, Switzerland on the invitation of Dr. Denis Vasyukov, who is and application scientist at the company and a former post-doctoral researcher in our group. After a tour of the company, Prof. Poggio had the chance to discuss with scientists and managers at as well as meeting with another former group member who is an employee, Dr. Lorenzo Ceccarelli. Lorenzo did his Ph.D. in our group and is now a mechanical engineer working on custom atomic force microscopy (AFM) equipment for industry.

From the 6th to the 7th, our FET Open collaboration, FIBsuperProbes, which is funded by the European Union’s Horizon 2020 research and innovation program, held its 2nd annual meeting in Tübingen, Germany. From our group, Ph.D. students Luca Forrer, Daniel Jetter, Aurèle Kamber, Andriani Vervelaki, Liza Žaper, post-doc Dr. Kousik Bagani, research scientist Dr. Floris Braakman, and Prof. Poggio made the trip to southern Germany. Our partners from IBM Zürich, the University of Zaragoza, and our hosts at the University of Tübingen also took part. Andriani Vervelaki gave a talk entitled, “Magnetic imaging of 2D ferromagnetic Cr2Ge2Te6” on Thursday and on Friday Dr. Floris Braakman gave a talk entitled, “Electron-beam lithography of nanostructures on cantilevers & scanning SQUID microscopy of Co magnets for spin qubits”. Thanks to Prof. Dieter Kölle and his group for hosting us in Tübingen.

On Thursday the 29th, post-doctoral researcher and former Ph.D. student Dr. Thibaud Ruelle celebrated his last days in Basel with a small gathering on the department roof-top. After completing a short post-doc in the group of Prof. Richard Warburton, Thibaud is preparing to start a new job at CSEM in mid-October in Neuchâtel, Switzerland. Good luck Thibaud and thanks for everything!

On Friday the 23rd, post-doctoral researcher Dr. Giulio Romagnoli and Prof. Poggio attended the final meeting of the Sinergia Nanoskyrmionics, coordinated by Prof. Dirk Grundler, at EPFL. Prof. Poggio gave a short summary of the research carried out in Work Package 4, after which Giulio presented the very latest scanning magnetic imaging results.

On Thursday the 22rd, post-doctoral researcher Dr. Kousik Bagani gave a talk at the MNE (Micro and Nano Engineering) Eurosensors conference in Leuven, Belgium. His talk was entitled, “Magnetic, Thermal, and Topographic Imaging with a Nanometerscale SQUID-On-Lever Scanning Probe”. The talk was part of a session on “Superconducting Nanosensors” within a series on “Superconducting Micro- and Nano-Devices (SMND)”.

This edition of MNE Eurosensors is the 48th in a series, which started in Cambridge in 1975, and is now the main international conference on micro- and nano-fabrication, manufacturing techniques, as well as applications of the fabricated micro/nanostructures, devices and microsystems into electronics, photonics, energy, environment, chemistry, and life sciences.

On Thursday the 15th, Review of Scientific Instruments published our article entitled, A tunable fiber Fabry–Perot cavity for hybrid optomechanics stabilized at 4 K. The paper describes an apparatus for the implementation of hybrid optomechanical systems at 4 K. The platform is based on a high-finesse, micrometer-scale fiber Fabry–Perot cavity, which can be widely tuned using piezoelectric positioners. A mechanical resonator can be positioned within the cavity in the object-in-the-middle configuration by a second set of positioners. A high level of stability is achieved without sacrificing either performance or tunability, through the combination of a stiff mechanical design, passive vibration isolation, and an active Pound–Drever–Hall feedback lock incorporating a reconfigurable digital filter. The stability of the cavity length is demonstrated to be better than a few picometers over many hours both at room temperature and at 4 K.

The apparatus was designed and built by former Ph.D. student and current post-doctoral researcher, Dr. Thibaud Ruelle and Ph.D. student David Jaeger. Post-doctoral researcher Dr. Francesco Fogliano finalized the apparatus and brought the project to completion. The work started on the initiative of research scientist Dr. Floris Braakman and his Ambizione project on optomechanical systems.

On Friday the 9th, Ph.D. student Liza Žaper gave a talk at the Condensed Matter Section of the Annual Meeting of the German Physical Society (Deutsche Physikalische Gesellschaft, DPG) on the campus of the University of Regensburg. Liza’s talk was entitled, “Magnetic properties of cobalt-nanomagnets: towards spin qubit control. 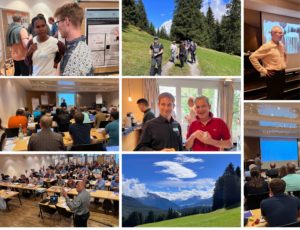 From Wednesday the 7th until Friday the 9th, group members attended the Swiss Nanoscience Institute’s annual meeting in Lenzerheide. Ph.D. students David Jaeger, Lukas Schneider, and Mathias Claus attended along with Prof. Poggio, who, since a little over a month, took over as director of the SNI. Lukas and Mathias presented posters entitled, “Functionalized nanowires as magnetic force transducers” and “Development of a new torque sensor with improved sensitivity for dynamic torque magnetometry”, respectively. David gave a talk on Friday morning entitled, “Towards hybrid optomechanics with hexagonal boron nitride”.

The meeting included a number of invited talks from Dr. Alexander Grimm (PSI), Prof. Sebastian Hiller (Biozentrum Basel), Dr. Walter Riess (IBM Zürich), and Prof. Tomaso Poggio (MIT), who gave a late-night lecture on “The science and engineering of intelligence” (and is Prof. Poggio’s father). A full program is here.

Group Members in at Spin Qubit 5

Group at CMD29 in Manchester

On Friday the 19th, we held our annual barbecue on the department’s roof-top with our colleagues from the Machine Shop, technicians, administrative staff, and friends. It was especially nice to see former administrator Audrey Fischer and post-doc alumnus Dr. Denis Vasyukov and his son Victor. Unfortunately, our attempt to precede the barbecue with some karting at the Sundgau track were thwarted by rain. Thanks to all who helped to organize and see you next year! 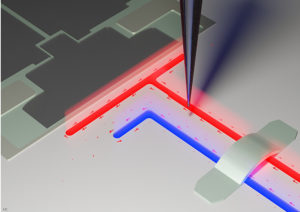 On Wednesday the 3rd, Applied Physics Letters published our paper entitled, Magnetic imaging of superconducting qubit devices with scanning SQUID-on-tip as a ‘featured’ article. The editors also highlighted the work as a ‘Scilight’ on the AIP website. The work describes experiments, in which we use a scanning superconducting quantum interference device (SQUID) to image the magnetic flux produced by a superconducting device designed for quantum computing. The nanometer-scale SQUID-on-tip probe reveals the flow of superconducting current through the circuit as well as the locations of trapped magnetic flux. In particular, maps of current flowing out of a flux-control line in the vicinity of a qubit show how these elements are coupled, providing insight on how to optimize qubit control. In the future, such maps could be used to design superconducting qubit circuits with less qubit decoherence to enhance quantum computing performance.

The experiments were carried out by former Ph.D. students Dr. Lorenzo Ceccarelli and Dr. Nicola Rossi during their time as post-docs in our group. They had help from Dr. Giulio Romagnoli. After Lorenzo and Nicola’s departure, Dr. Estefani Marchiori took over the work analyzing the data and putting it together for publication. The qubit circuits were provided by the group of Prof. Andreas Wallraff at ETH Zürich, where our main collaborator was Dr. Sebastian Krinner. Johannes Herrmann and Dr. Jean-Claude Besse were involved in the fabrication of the circuit at ETH. 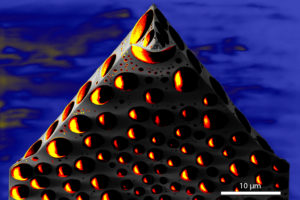 Ph.D. students Luca Forrer’s and Aurèle Kamber’s colorized scanning electron micrograph (SEM) of a cantilever contaminated by TorrSeal droplets was awarded a Scientific Jury Award at the the Annual Meeting of the NCCR SPIN in Pontresina in mid-June. 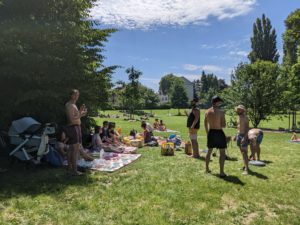 On the 3rd, we held our 6th annual group BBQ at the Birsköpfli park along the river. Group members and friends had a relaxing time enjoying the beautiful weather, eating, drinking, and cooling off in the river. See you next year!